The video of a frustrated van driver deliberately driving his van into a cyclist has achieved cult status. It has attracted outraged comments on twitter both from cyclists, for whom such dangerous punishment behaviour from motorists is all too common, and from motorists fuming about the cyclist being in the “middle of the road” for “too long”.

Meanwhile, twitter is also alive with angry complaints from the motoring fraternity (and much less often from the motoring sorority) about money spent on cycleways and other cycle infrastructure which is blamed for allegedly worsening congestion and pollution.

British transport policy is in a self-created vortex of conflicting objectives.

The blogger and traffic engineer, Ranty Highwayman, put his finger on the essential point in a tweet:

If roads like this had proper world-class cycle tracks which people wanted to use, this wouldn't have happened. That's the bigger picture. https://t.co/tpMSDHWu5V

In London the black cab trade (which has been the originating force of most of the myths and lies about the new London cycleways) has argued vehemently against the cycleways being physically segregated. Their initial claims that the cycleways would only be used for an hour or two per day in peak periods and then only in summer months were rapidly proven to be false with a steady and increasing use all year round and for much of the day.

But they persist in demanding that the physical protection for cyclists be removed and replaced with painted lanes which would only be in operation for 12 percent of the week – and which experience tells us would be made useless during those minimal hours of operation by taxis stopping in it to pick up and let down passengers (obviously they wouldn’t be prepared to stop in the “middle of the road” to let their passengers out).

In twitter discussions I have repeatedly asked cabbies propounding this approach whether they would prefer to have all the cyclists currently using the cycleways cycling in front of them on the carriageway rather than in their own space so both bikes and motors can travel at their own preferred speed. It may come as no surprise to hear that I have not received a single answer to that question.

British transport policy is also expert at declining to address choices prompted by the reality of the problems that result from over-dependence on the motor vehicle.

As the murderous van driver video illustrates, drivers really don’t like cyclists in front of them on the road. And, of course, those of us who venture to cycle in the United Kingdom already know this. The video just captures everyday life on Britain’s roads and the asymmetric war conducted by some (but not all) motorists. How many of us haven’t suffered a motor driver using his/her ‘ton plus’ of metal to grab space by force majeure? It may not be in exactly the same manner, but we’ve all many times had to brake like fury or throw ourselves off our path to avoid the metal-garbed space-grabber.

Cyclists (except for a sad minority of self-proclaimed “keen cyclists” who display remarkable subservience to motor-domination) don’t want to share the roads with faster cars. Some cyclists have been trained to value and argue for the “take the lane” philosophy.  But most of us use it only in extremis, fearful of meeting someone like the viral van driver.

Motorists don’t want cyclists in front of them. Some because they just want to speed, others because they are fearful of rousing the ire of speedsters behind them.

But there should be a community of interests. But, as the London cabbie trade shows, lots of motorists get upset at seeing money spent on cycle infrastructure.

Local authorities and highway agencies have long ignored cycling and often do their best to avoid spending on cycle infrastructure and, where they do dig into the public coffers, often spend the money on implementations that are ineffective, unsafe and frequently of laughable quality. That London’s cycleways have aroused such anger is a sure sign that they are better quality than the normal British botch.

British transport policy has got itself into a gridlock. Unwilling to fund quality infrastructure, it’s also unwilling (and probably quite incapable) of humanising mixed infrastructure. The system lacks the will to enforce road law effectively.

The viral van driver video tells us much more than that there is a dangerous sense of entitlement abroad in drivers. It also points to the policy impasse that successive governments and road designers have herded us into.

Sadiq Khan, the mayor of London, is frozen with fear at the prospect of continuing on with his predecessor’s highly successful cycleways programme, fearful of protests from cabbies, bus company lobbyists and too many old Labour ‘small-c conservatives’ within his party power base.

Theresa May, who endlessly proclaims herself a strong leader, is also paralysed with fear. This is amply illustrated by the government’s wet blanket of a policy for improving air quality, announced under intense legal pressure from the courts this week. The prime minister is said to have been responsible for vetoing any measure in the proposals which might upset the motorist lobby in the right-wing press which have taken up cause of the right to pollute our cities. 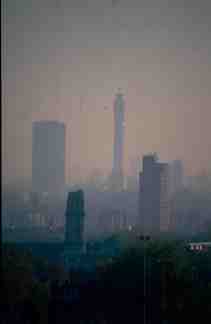 Transport policy in the UK has backed itself into a stand off. The van driver video is a terrifying symptom of the outcome of government policy. Not strong, not stable, but weak, unstable – and unsustainable.